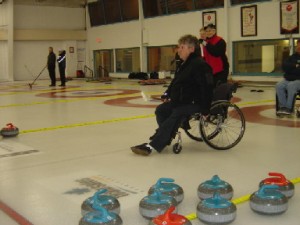 Today is day five of cabin fever.  Between the snow and the temperatures wheelchair travel is discouraged.  Now I am not saying that everybody with a disability hibernates in the winter but it certainly does tug at my recessive sloth gene.  So here I am at 11:45 in the AM of day five watching the snow pour down.  Oh, did I mention that three of those days involve lost work time and I don’t get paid if I’m not at work.  Screw your snowman!

However with that said I did use the weather created jail cell to finish off the training module I have been working on.  With that little contract done I can submit my invoice and more than make up for the lost time at work.  It does become a challenge to avoid becoming a couch potato and making constructive use of my time so I am very grateful for these little contracts.  Thus, to me, the Internet is my research assistant, communicator and my travel planner.

The sun was out on Saturday (day 3) so I did make an effort to get out of the condo.  I drove all the way to Safeway (two blocks, chuckle) but the point is I drove.  Now here is where all of the shit I avoided learning in my youth comes back to slap me in the face.  You remember that grade 8 physics class where they talked about the expansion and contraction of various gases in varying temperatures?  Wow it is bizarre what type of thoughts whip threw the old noggin in a state of cabin fever.  Anyway that comes into play.

I am not sure what the ambient temperature on my wheels would have been but the outside temperature (which was -22) and the temperature of the snow/ice my wheelchair tires were rolling over I discover I had approximately 90 seconds before they started going flat.  That is that contracting gas thing.  With me so far?

But that was fine because I was into Safeway in around that 90 second clock.  The contraction stops but no new air goes in.  Safeway floors are not that hot.  I only say that because I have had a tire (I set my wheelchair wheels in the backseat) pop on me due to the heat of the sun coming in the back window.  It scared the shit out of me and I just about drove off the Hoover Damn but that’s a story for another time.

Anyway back to Safeway.  So by the time I come out of the store my wheels are already a little soft.  Well do you realize that somewhere back in that grade 8 class while you were probably dozing or irritating someone relentlessly the topic of exponential loss would have come up.  I’m chilling in the back row of the class and already have come to accept the fact that a word like “exponential” would ever play a part in my life so I have tuned out.

Turns out I wasn’t as tuned out as I had given myself credit for because that is the exact word that went threw my mind as my left tire quickly lost most of its air on the wheel back to the car.  The exponential aspect:  less air in my tires coming out of Safeway meant they contracted faster with the already decreased internal pressure.

The things one thinks about when in the midst of cabin fever.  Plus it helps me get past the guilt of abandoning my very understanding employer.  Have a good one!