I have been very negligence of late in my writings and for that I apologize to those good folks who took the time to subscribe to my site.  Over the past two months I have written four training modules for the Alberta government which is where my writing time has gone.  With that contract done I promise to be more regular with my postings (and that is not an ad for high fibre breakfast cereal).

I had left you the last time describing the purchase of a wheelchair, something one would think is straight forward for someone who has used a chair for as long as myself.  If you recall from the last writing, Red Tape Parade, after almost three months of back and forth the Alberta Aids to Daily Living refused my application.  Their rationale was that my request did not match up to their policy needs but in another 18 months it would.  I was also told that this is a non-appealable decision.  Well now back the truck up because as far as I am aware we continue to be living in a democracy where there is always an appeal process to any government decision, contrary to what Mr. Harper and his club would like us to think.  But then I don’t want to mix federal and provincial political issues together so we will leave that bit for now.

All legislated issue affecting the electorate has an appeal process.  You just have to know where to look and my time as a policy analyst with the BC government has definitely helped me develop the skills to research that.  So I set the appeal process in place which also included keeping my MLA in the loop and I am fortunate to have an MLA who also uses a wheelchair so Kent Hehr is familiar with many of these issues.  Of course Kent is lucky enough to have good employment with a decent benefits package.  But again I digress, I took all of the steps required to attain a new wheelchair.

By the end of November I had word from one of the program managers that they she had reversed the decision to refuse and would now go ahead with the assistance.  I think it is important to point out here that what I would be receiving is a $3500 grant towards the purchase of a wheelchair that will wind up costing over $7400 so I am picking up a good chunk of the costs.

Once Christmas was over and things began to settle back to normal I thought I had better check out a few options on difference titanium chairs.  Titanium is very light while also being very sturdy.  Those are important factors to me for a number of reasons.  My current chair, also titanium, weights approximately 22 pounds but it strips down to 15 pounds when I am loading it into my car.  Now I load that chair at least a dozen times a day so light weight is important.  I don’t go anywhere with my car that doesn’t require a minimum of four lifts, get into the car, get out of the car, get back into the car and unload at home.  Four lifts for one trip keeps me cognizant of problems associated with repetitive stress which is why wheelchair weight is a factor.

However I had yet to actually receive my letter of authorization so in mid January I called AADL again to see what was happening.  It was in the context of the call that I discovered I had been turned down again.

I mentioned my conversation with the manager who had reversed that decision to the person on the other end of the phone.  That persons tells me that the manager I am referencing had retired shortly after my original discussion so her decision no longer stood.  Well if government is going to start reversing decisions based on some senior bureaucrats’ retirement get ready for about five years of major disruption.  Demographically we have a massive amount of baby-boomers in those management positions and they will be retiring in droves over the next couple of years.  So if decisions are going to be reversed due to retirement things will be crazy for a while.

I am also left wondering if the manager I dealt with agreed to reverse the decision to just  appease me knowing it wouldn’t be adhered to after she left allowing her the least stressful way into retirement and Christmas.  Whatever, I got back into appeal mode and started making calls plus paper trail.  Always have a paper trail, e-mail makes it so easy!

In mid February I received a phone call from an Edmonton AADL office asking me for my mailing address.  The women that called stated she was sending me a letter from the acting director of this department regarding my appeal.  When I ask her why she didn’t have my address considering they are managing my case file she tells me she does but she just wanted to verify it.  Well the address she gives me is the where I stayed over five years ago in Edmonton.

Now I only mention this part because I have been at this address for five years, an AADL occupational therapist had found her way to my place on three occasions and I have received previous correspondence at my CURRENT address.  I also know that any licensed vendor in the province who has your provincial health care number can phone the AADL IVR line and pull up all types of information including your most current address.  Yet the ACTING Director of AADL, one Dr. Patti-Jo Sullivan, has an office administrator personally call me to find an address that should be in their system already.  So much for a bureaucracy’s ability manage information or utilize resources effectively!

So six months after starting all of this I received a letter dated Feb 21, 2013 stating they would cover the grant portion of my wheelchair however with an interesting caveat.  They want me to fully understand that “This form provides client acknowledgement that further funding will not be considered for a minimum of 6 years and that early replacement is not an option.”  I’m not arguing that but I will say a lot can happen in six years so I am not saying I won’t argue it if the need arises.  I refuse to live my life based on policy interpretation rather than actual need. 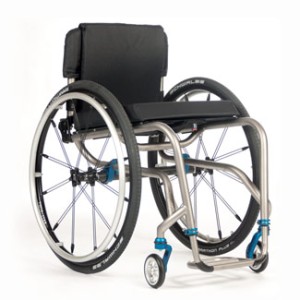 From my perspective AADL is there to provide a service to a largely marginalized segment of our society as well as assisting those attempting to live as independently as possible.  I don’t believe any social program should be a job creation project for civil servants who want to base decisions totally on a nebulous interpretation of a policy manual.  In the meantime I think this is the new wheelchair I will be getting.