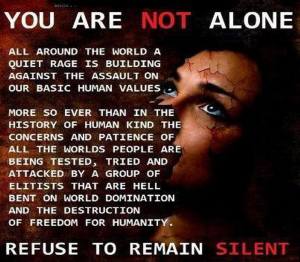 Silence leads to the erosion of rights. pay attention and speak out!

I would like to thank Velvet Martin for the inspirational picture, I grabbed it off her Facebook wall.  Velvet has become very good at speaking out since having survived six years with a government imposed gag order following the death of her daughter.

I am passed the point of being angry with our current crop of politicians on all levels of government and I will speak out.  With that said I am also at the end of my rope with the electorate.  This apathy and the “I don’t really care” attitude has to stop before we face our own Ukraine dilemma.

People like Rob Ford are as entitled to run for political positions as anyone else but when their actions (and lack of insight) causes one of the largest cities in Canada to become the brunt of the international joke factory I really have to look at the electorate.  Whether people agree with it or or not political life is public life and anyone entering that field has to come to grips with that.  You run for a political position you forfeit a lot of rights to a private life.  This doesn’t mean you can’t have a personal life but get use to the fact that it will also be public.  That is the reality of politics, get over it.  And if you continue to vote for this kind of behaviour, which is your right, you run the risk of losing your democracy.

We have lost sight of what a politician is and we are to silent about it.  60% or less of electoral turn outs is a good indicator of just how silent we are becoming.  The electorate has to understand that WE the people put these politicians into positions of authority and that they work for US, not just their Party.  When their work for their Party becomes more important than their work for the people they are no longer politicians, they become elitists.  It is fighting this elitist attitude that brought the Ukrainian people out into the square in Kiev, that brought protesting Syrians out in the 100’s of thousands and violent protests in Venezuela.  These are just a few examples of where elected officials backed off of their election promises and moved into the arena of elitism.

When James Moore, the Canadian Industry Minister, can stand in front of the press and make a statement like “The government..is it my job to feed my neighbour’s child? I don’t think so.” that is elitism.  Yes he later apologized for it but it was the first thing out of his mouth and he was basically forced to apologize because enough people spoke out.

When Jason Kenney, the Employment Minister, can stand in front of an audience to praised income splitting as a benefit for what he called “stable family units,” he has exhibited an elitist attitude.  That comment denigrated every single parent family, every family living on poverty level wages and anyone else who isn’t making over $100,000 a year.  According to recent studies the average income in Canada for a two income family is under $76,000 per year.  When a government is developing policy that only benefits less than 20% of the population, I’m sorry, it is elitism!

When Shelly Glover, the Conservative MP for St. Boniface, Manitoba can demand the provincial government suspend the rights of Vince Li and his day passes that is elitism.  What happened with Mr. Li was a barbaric tragedy, I won’t argue that.  However the fact that he was in a deep psychosis at the time and we do have laws around “not criminally responsible” we have to respect those laws.  There is a lot of emotion attached to that case and would take a lot more time to get into than I have here but it is still an example of an elitist politician who wants to pick and choose who has rights.

If we go down the road Ms. Glover is suggesting then god help every parent out there who suffers from dementia.  We have just finished with a case here in BC regarding a 95 year old dementia patient who allegedly caused the death of a fellow patient.  Anyone who understands dementia realizes he was not responsible for his actions anymore than Vince Li was for his behaviour while in his psychotic state.  What Ms. Glover should be doing is demanding a national mental health strategy rather than pushing for double standards when it comes to individual rights.  Double standards is a tool of elitism.

When a government destroys hundreds of thousands of scientific reports and papers we are moving closer to elitism.  Personally I don’t want a bunch of ideological elitists making decisions for me.  As a person who grew up with a disability I have fought to hard for my rights and protections to see them eroded by a bunch of elitists masquerading as politicians.  It is time everybody started looking at the details of what is going on and speak out.  The first thing you can do is send your MP a note and speak out against this proposed Fair Elections Act.  That piece of legislation is not just a brick out of the wall of our democracy, it is the removal of a support beam.  Even Preston Manning spoke out against it at his annual think tank soiree and that is saying a lot.

So as the picture says “You are not alone, refuse to be silent”.  Be part of the electorate and get out to the polls to support democracy by getting elitism out of politics!

2 thoughts on “Politicians or Elitists? There is a Difference”