Over sixty years and I am still part of one of the biggest unplanned social experiment ever launched in Canada, the treatment and integration of the polio survivor.  I say unplanned because in 1953 I am not convinced society had any idea about the consequences of the numbers of survivors that would still be around 60 years later.  The year of the last major polio epidemic in Canada, 1953, was also the “Summer of Silence“.

The fear of contracting this devastating infection created a summer of silence.  Public pools, public parks and any other public meeting places were closed down.  Parents avoided community parks and swings went quiet due to fear of the virus.  You couldn’t pick up a newspaper without reading about the latest numbers of polio.  I say newspaper because there were not a lot of people with TV’s in those days but the few that did have them were seeing the same news on the TV.

Movie theatres, the few that continued to get viewers, ran news clips focused on either the ending of the Korean War or the latest information on polio.  Most of the baby-boomers will remember how news was always the first five minutes of a movie back in those days.  In 1953 the population of Canada was just shy of 15 million people and there were over 9000 reported cases of polio in Canada that year resulting in over 500 deaths.

Parents were afraid to send their kids to school and certainly were not sending them to public playgrounds.  The summer of 53 was really a summer of silence.  No laughter in the parks, no creaking of swings and no splashing of water in the public pools.  Local governments were closing everything down in an attempt to isolate the epidemic.

Of course it is no surprise that the baby-boomers make up the bulk of the polio survivors today.  The baby-boomer generation represents 8,200,000 people today and the total number of polio cases in their same timeframe was almost 18,000.  That represents 2.1% of that target generation.  It would be difficult to predict what type of numbers would be generated today if another epidemic of that type occurred.  So much has changed but what hasn’t changed is that there is still no cure, just a preventative measure.  The polio vaccine and even that is being ignored today. 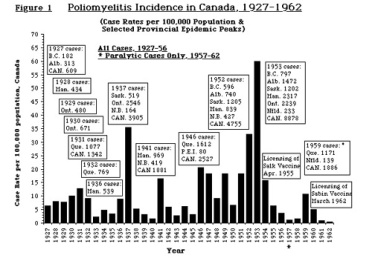 Polio outbreaks over the years.

Not only is the vaccine being ignored by larger groups of people but our current immigration programs are bringing in refugees from countries of strife where polio continues to exist.  However with transmission rates and the internal immigration patterns of Canadians today versus the 50’s the numbers would undoubtedly be much higher.  We would be looking at a pandemic the likes of which this country hasn’t seen in over fifty years.

The social experiment I referred to earlier involved the introduction and assimilation of one of the largest groups of disabled children ever seen in Canada.  This was done at a time when terms like access and inclusion didn’t exist within the same context as today.  At the time the life expectancy for someone post disability was 25 to 30 years.  Nobody expected those polio kids to ever hit retirement.  Well here we are!

In 1950 the average life expectancy for a Canadian was only 66.  Today it is over 80 with many pushing 100.  This has changed the face of retirement and we now have a brand new generation of persons with disabilities hitting aging milestones never anticipated.  The social experiment continues but is complicated with two generations in between who have forgotten their history.

People have become complacent and forgotten just how devastating a disease like polio can be.  I continue to run into an increasingly unaware number of people who look at me while they scratch their heads asking me “What’s polio?”.  I can’t just sit back and passively let that memory fade.  That’s a path to danger and I couldn’t live with my own conscience if I just ignore it.  I have a 4 year old grandson who is to important to me so the idea of him being exposed to such a threat is beyond me but not beyond my ability to influence.

Out of interest I did some research on polio awareness campaigns.  I looked at Indiegogo and Kickstart to see what social media was doing in regards to campaigns to raise awareness.  There were actually a lot in the process but none of them were showing any success.  All of the ones I looked at had expired without reaching their goal.  Never having been a person to just sit back I started my own social media campaign.  It was my plan to produce an educational video to be released in conjunction with the 60th anniversary of the release of the polio vaccine in Canada, April 1955.  It never did attract much attention, it failed.  I can live with that but what I can’t live with is the potential for thousands of other children to contract this avoidable disease.

#worldpolioday.  What are you doing to raise awareness on that day?  Register your activity now and for more information check out some of my other Polio Diaries and have a good day.

2 thoughts on “Polio Diaries – The Summer of Silence”