Well after my Sunday rant it is time to move on with something more progressive.  “Progressive”, something that seems to be fading in the new Canadian political culture.  Time to move on and see if Canada is still open for business.

Of late I have been paying close attention to the whole niqab issue which is actually a non-issue that the current government has done everything in their power to make an issue.  Like the article in the Globe and Mail, I fail to see how this really impacts Canada.  It does however rings bells from my past that to me are very frightening.

To compare my wheelchair to a niqab is a little stretch but it makes my point.  This is the politics of fear.  Having grown up during the height of the cold war I know the politics of fear very well.  It was used effectively then and is popping its ugly head up again.

During that same time period it was considered “humane” to sterilize persons with disabilities.  The government of the day was doing me a favour while helping me become a better member of the “Canadian family”.  In 1928, the Canadian province of Alberta passed legislation giving them the ability to sexually sterilize disabled individuals.  Prior to its repeal in 1972, more than 2,800 people were sterilized in the province of Alberta with women extremely overrepresented. 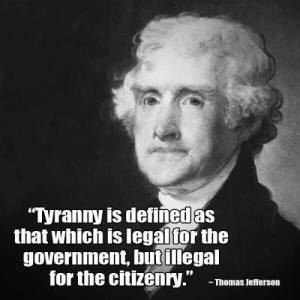 The politics of fear

However it could only be accomplished because of a piece of paper majestically referred to as “legislation”.  A piece of legislation that used fear as the motivator and that fear was build on the premise that the disabled would only mess up the gene pool.  When you start using the “gene pool” as your argument you are moving into the territory of tyranny not good governance for all.  When you have legislation that takes away the rights of any individual because of their life rather than the process of breaking the law it becomes tyranny.  My parents or doctor couldn’t decide to sterilize me, it had to be the Alberta Eugenics Board that made that decision.  So when I got home from school in September of 1966 and found the letter in the mail from the Alberta Eugenics Board I knew right away what it was about and to me there was an act of tyranny being aimed at me.  Based on Mr. Jefferson quote it would appear to be an act of tyranny which is exactly what the niqab issue represents.  We allowing this non-issue to slip into a form of tyranny in Canada.

Under the Alberta Sexual Sterilization Act , a tool of the Alberta Eugenics Movement, the government of the day could take away my right to have a family but “allow” me to get a little nookie every now and then.  This was sold to the general public by convincing them it was in the best interest of society to keep the gene pool from diluting but still allowing sexual activity to persons with disabilities.  This was the “politics of fear“.

The topic of the niqab strikes me the same way.  A women’s choice over what she wears should be her “choice”, the same way it should be my choice over my ability to have a family.  The niqab no more defines a person than my wheelchair defines me.  I am not my wheelchair the same way a women is not the niqab.  During the Citizenship Ceremony you are also expected to stand at attention.  Does this mean because I’m wheelchair dependent and can’t stand that I should have my right to become a citizen removed?  If not what makes my wheelchair different from the niqab?

Well for one thing it is much harder to demonize someone with a disability than it is to convince everyone that a niqab is a sign of terrorism.  The nature of divisive politics is knowing which issues to use as wedge politics.  Harper has now driven a wedge between most Canadian and anyone wearing a face veil.  A niqab is nothing more than a face veil so should brides now be forbidden from wearing a wedding veil?

The Harper government are very successfully linking the niqab to terrorism.  I don’t support terrorism but I do support a persons right to their beliefs and traditions.  That is what defines Canada.  We have a long history as being a tolerant accepting country but that is disappearing quickly.  Niqab’s are not the face of terrorism but they have become a face of the politics of fear.  Harper now has Canadians thinking every Muslim in the country represents a threat and something we should be afraid of.

What never gets touched on is the fact that to get to a Citizenship ceremony you have had to be in the country for five years, minimum.  Do they just become terrorist after five years of residency?  You also have to expose your face for identification purposes before entering the ceremony.  The actual swearing in component of the ceremony takes about two minutes.

Mr. Harper and his MP’s keep referring to joining the “Canadian family”.  Well for the past forty years that same Canadian family has been about choices and rights.  What does it say about the values of that family if, for that brief moment of joining, you have your rights suspented?  It is sounding more and more like Canada has closed down.

As much as many people would like to we cannot fall into the trap of deciding who can and who can’t be protected by the Charter of Rights.  Or before you know it we will be forcefully sterilizing people again.  I dodged that bullet in 1966 and I, for one, do not ever want to go back to those days again.  If we start telling people at the very moment they are joining the Canadian family that their rights will be suppressed for a few moments then we are taking steps back to those days.

One thought on “That Was Then, Has Now Changed”