“Truth is nothing but a formulated perception of experienced reality” – L. J. Vanier

Individual perceptions can differ based on scenario or cause.  How you perceive perception will change based on the situation or cause you involve yourself in.  If you fail to recognize where the perception is coming from you will lose your flexibility in resolving the issue.  If you are relatively new at activism then put a check list together for yourself to provide a template of assessment.

I participated in a conference call this morning with “Dying With Dignity Canada“.  Now I am not going to argue the pro’s and con’s of end of life decisions however  I will say we need to put as much serious thought into the compassion for end of life care as we show in fighting for the life of a new born.

To me end of life planning is very much a personal decision however since Bill C-14 the process for resolution of end of life planning is a muddled patchwork of systems across Canada.  Dying With Dignity Canada approached me to be part of this organization, in part, because of my background as an  effective and informed activist.  They are working with individuals who have an understanding and appreciation for the complexity of this issue.  Since my days of traveling to places like Standing Rock are behind me I now advocate through social media which is how I found myself on the call this morning.

I have knowledge and ability that some like minded individuals are interested in, people I don’t really know but share a common goal.  They are spread all over the country so their locus of influence on me is very limited but driven by a cause I can participate in.

I had a discussion last week with someone from Alberta regarding human rights issues.  A couple of days before that Barrier Free Manitoba had been in touch with me.  These groups sought me out because of a perception.  They didn’t look me up in the phonebook.  They responded to someone else’s perception of me.  Lately I have begun to question that perception.  I have doubts…

Since the American election I have spend a lot of time reassessing my role in life.  An acquaintance of mine is about to release his second book “What if you were wrong about your life”.  I enjoyed his first book “The Lies Behind the Truth” so looking forward to Randy Kolibaba‘s new perspective.  Randy is a retired RCMP officer and a strong advocate for the recognition of PTSD issues but relatively new to the world of activism.  After all with a 30 year career in the RCMP there are certain life restrictions that come with that career choice.

I have fifty years of activism experience but I now find myself questioning my life’s achievements.  In keeping with some of the philosophy I got out of Randy’s first book  I have spend the last couple of weeks doing an internal inventory of myself. 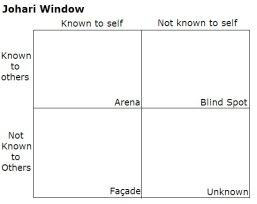 In the last couple of days I have revisited some of the foundations of my belief system.  One of those layers involved the Johari Window training.  It made up a big part of my early training and laid the groundwork for so much of who I am today.  So much has been built on top of this but it does feel good, every now and then, to till the soil.  Regarding the window…

I know the arena I share with others.  However that arena does evolve so be prepared to be flexible.  That flexibility allows for better solution based decisions.  I recognize my facade, I build it to keep others distant.  I have spend over fifty years developing a strong “independent” facade.  Now, with aging, that facade is cracking and becoming a detriment in that is stronger than my ability to be as independent as I use to.  But many people still expect me to.

Over the years I have become better at identifying those “blind spots” which are also flexible and fluid.  What makes blind spots so fluid can be attributed, in part, to societal beliefs.  How Canadian society currently sees death with dignity has come a long way since the time of Sue Rodriguez and that has changed the blind spots.

It is that “Unknown” area that is so difficult.  It is the unknown that drives the people you are closest to away.  That unknown is where you become “white noise”.  Those that want to feed off your knowledge will play a small part in the Unknown pane but those whose love and understanding you hope to feed from can have a big role in the Unknown.  The arena’s and the blindspots are of no interest to them, they live with your facade.  The danger is when the facade has become so real to those close to you that they live in the Unknown pane.  Since you don’t realize and they don’t realize it, it’s a short step to misread perception with a total misunderstanding over who you are.

So if you are part of the new generation of activists, get to know the Johari Window to help put things into perspective.  It is hard to be true to yourself when you are not fully cognizant of the outside factors.

Politically engaged, defender of rights whether or not I agree with the situation, techno nerd and someone who believes in open dialogue as well as open democracy. Father/grandfather and polio survivor who has maintained his own independence all of his life View all posts by terrywiens