“I think the reward for conformity is that everyone likes you except yourself.” – Rita Mae Brown

Happy New Year and am I ever glad 2016 is finally in my rearview mirror.  I have some friends who had an exceptional 2016, Eugene Stickland for example, congrats buddy.  When I knew Eugene a few years back in Calgary it was in the context of a Cheers style “hanging on the bar stools” after work for a casual drink.  Usually a handful of regulars from around the neighbourhood would congregate between 4:30 to 6:30 then everyone was off with their life’s.  From what I’m hearing from others 2016 wasn’t as fruitful.

For me 2016 ranks right up there as my second worst year to date with 2015 having been the worst from a psychological point of view.  So 2017 isn’t about just turning the page, it’s about starting a new book.  There have been damages done in 2016 that are basically irreconcilable.  Those are damages that occurred as a process for change established back in January of 2016.  My commitment for 2016 was to be sure conditions were in place to make 2017 a better and not a bitter year.

Due, in part, to inadequate access I was becoming increasingly socially isolated in 2015.  I felt that taking a heavier than usual emotional tole on me.  For the first time in my life I sought out a therapist I was feeling that bad and for somebody who values independence to a fault this was a big step.  I should have done this twenty years ago.

I’ve noticed a pattern in my life where every fifteen to twenty years some major event comes along which offers me different pathways.  Which path I take can make a world of difference.  I have just past a twenty year cycle where I ignored so many of the important things.  The signs were there but I ignored while becoming increasingly depressed, a low grade depression (I told myself) that I just kept to myself.  I say low grade since recent studies have shown many people who grew up in institutional setting are likely to experience PTSD symptoms very young and grew up thinking certain feelings are natural, like depression.  We know what the residential schools did to the First Nations.  Kids that grew up in hospitals had a different type of trauma to deal with but it was trauma none the less.  In a hospital you become very good at being who we needed to be for those people around us. 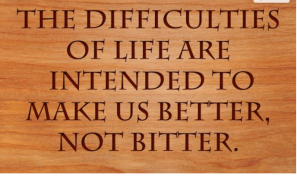 I came out of 2015 bordering on bitter.  I have spend my life believing I used experiences to make myself better, not bitter.  I have no desire to be that “old bitter guy down the hall” and if I think that is happening then it is up to me to make the appropriate changes.  So I gave myself and those who were close one year to turn things around.  I promised myself I would spend the year building respect for myself.  Self respect is something I have always taken for granted so you don’t notice it as much when it begins to wane.  You just start to belief everything those close to you are telling you.

I missed a very important developmental moment twenty years ago by being what so many people expected me to be, non-disabled.  I had spend my life doing whatever I wanted to do on crutches so the transition to  wheelchair permanency had a much bigger impact than I had been prepared for.  I was becoming disabled and I had no idea.  It had been a slow transition so by the time the permanency hit I was under the illusion that it was no big deal.

When I look back on it I can track my wheelchair dependency over a 14 year period and measured by surgeries.  That’s probably a little weird and I’m probably not the only person who measures by various medical procedures rather than years.  A lot of my childhood memories are surgery based rather than birthday party but lets skip ahead.

Gallbladder surgery in 1982, six weeks post surgery unable to use my crutches so I used my wheelchair in a limited but protected environment.  Carpal tunnels 1988.  Pretty hard to use your crutches following that and use of the wheelchair isn’t all that convenient but you made do.  That type of dependence is insidious.  By 1996 my shoulders had worn out to the point where crutch use was gone and that is when I should have opened my eyes but didn’t.

I embarked on my own journey that echoed so many journey’s I had listen to from others when I still worked in the field.  Stories I had heard in the 70’s as a member of the peer support team with the Canadian Paraplegic Association.  Experiences I had counselled my patients on in the 80’s while working for the Holy Cross Hospital.  Journey’s that had been shared with me from people starting life all over and looking for training while I with the Canada Employment and Immigration Commission in the 90’s.  I did everything I told people never to do.

I lost all contact with who I was.  I had always been what those around me needed me to be.  I had never been what I thought I was but then I had spend most of my life being a person of circumstance and not of planning.  I sat there and watched distance grow in an already tenuous relationship.  I began to hate my career.  Traveling was becoming more of an inconvenience than a joy.

1998 bang my father died.  Another swipe at the strength and confidence level. 2002 separated, well within the seven year divorce guidelines shown in 70% of new spinal cord injuries.  I was following the formula perfectly while not even recognizing it.  What followed was a ten year period of what can only be described as a very controlled chaos and came to a head in 2015.

Having recognized and acknowledging a lot in 2015 I set some conditions to meet for 2016 with results based on outcome instituted in January of this year.  So here we are at the beginning of 2017 and I am about to start living with the results of decisions made a year ago.  I don’t believe anyone could say I didn’t prepare.  Now to move on living with the results and more of an awareness that I hope leads to some form of closure over my failure to have recognized the wheelchair transition.  Happy New Year…