I am extremely concerned over the events that lead up to yesterday’s Women’s March and disgusted over the need for it.  I thought my days of participating in civil rights marches were over but I was wrong.  I can’t quit now and watch all that I fought for disappear.  This March is not just about women, it’s about protecting the civil rights of everyone.

America has elected a president, one of the most powerful positions in the world, who will say, do or denigrate whoever he deigns to at that moment to advance his ego.  I say his ego because he has been very light on policy except to undo all the “damage” he states the Democrats have wreaked since Obama’s Presidency.  America elected a President whose platform is based on how great he believes himself to be.  Asked many times on the campaign trail about his platforms the best he seemed to be able to do was reassure everybody they don’t need to worry because he’s so great.

My breaking point, mind you I was stretched pretty taut by that point, was his denigration of a disabled reporter.  Yet so many people initially ignored this.  I got so pissed off my own family were prepared to disown me for making that big of an issue at the time.  It now appears that many more were watching than I realized and yet there are still deniers. 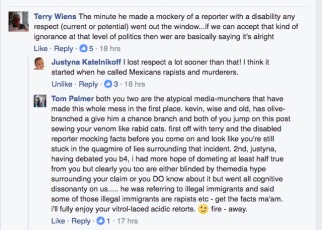 I made a brief mention of the incident on one of the Facebook pages I am connected to only to receive an immediate backlash.  I have no idea who this Tom Palmer is however as someone who worked as a therapist for almost fifteen years I recognize the syntax he is creating.  When a simple comment regarding a single action can be seen as “you jump on this post sewing your venom like rabid cats. first off with terry and the disabled reporter mocking facts before you come on and look like you’re still stuck in the quagmire of lies surrounding that incident“.  I don’t respond to those people because they are like Trump, total denial and blinders to actual facts.  I have spend close to fifty years as a disability activist and I’ll be damned if I’m going to sit back at the expense of every rights advancement that has been made in my community, the disabled.

My experience has been comment’s like that are based more on a rigid ideology than fact and anything one says to this type of person is just going to feed the narcissistic nature they share with the new President.  When someone can take an innocuous comment and turn it into “sewing your venom like a rabid cat” they are not looking for discussion, they are in search of verbal dominance at any costs.  Can’t waste my time on that.

I have been debating with the younger members of the disabled community over their role in change.  I have expressed my concern over their apparent complacency.  I know too many younger disabled who are very quick to adopt the status quo as rights are slowly eroded.  My generation of activists invested the better part of our life’s fighting for access, not just physical access but access to services and programs.  We fought for things to make the world a little easier for the next generation and now that generation takes this for granted.  They don’t see a need to protect something they never had to live without.

From listening to many of the senior members of the various Women’s Marches yesterday it is apparent some of those activists also feel this way.  Women who fought for the right to be equal fifty years ago having to seemingly start all over.  They are not only angry but many are feeling betrayed by the “modern” woman who enjoy much of the privilege gained by the battles of the women’s movement forty to fifty years ago.  How quickly people forget their history but the demographics of the marches showed women in their 60’s, 70’s and even one case of a 91 year old show how wide ranging this issue has become…besides world wide.  Gloria Steinem is back in the mix and she is pissed.

I share some of these concerns with the new generation of disability activist.  I hear too many of them saying “don’t make waves”, “let’s be reasonable” as gains won are slowly eroded. I know too many who find it easier to accept some loss of #access to fighting that loss.  The fact that they could actually attend a school in the 90’s was based on rights won in the 70’s.  As a child I was able to attend school by living in an institute, inclusion came thirty years later after laborious work by that generation of activists.  Now the American Supreme Court is re-evaluating the rights of access to education for the disabled.

Although called the Women’s March, many other disenfranchised and marginalized organizations became involved.  Vox reports the Women’s March as the largest gathering of people with disabilities in the history of the States.  A Facebook community, Disability March, quickly jumped to over 1300 members in almost no time.  So to all of my allies and disability activist friends out there, start taking (or renewing) a position.  We are losing ground quickly that has taken many people thirty years plus to achieve, now is not the time for complacency…

How Valuable is Information to you?