I was awake at 4am this morning which is really unusual for me.  However I was awoken by what felt like a bunch of Smurfs playing tug of war with the distal bicep tendon in both arms.  As an added benefit Papa Smurf was busy applying a cattle prod to the tip of

my little and ring fingers sending sharp currents from my finger tip to the palm of my hand.  This has happened before but never in the middle of the night so after twenty minutes of uncontrollable hand spasms I decided to get up.  That’s a good three hours lost of my usual sleep pattern which has been very good since getting the new bed.

Over the last couple of years I have been getting a better nights sleep in my LazyBoy than my bed so decided it was time for a bed with a recliner function.  This plan was also supported by my doctor who told me it should help with my sleep apnea issues.  One of the community health workers suggested I go to a medical supply house and pick out a hospital bed.  She maintained that would be the easiest even though I was absorbing the total cost.  No programs for this. 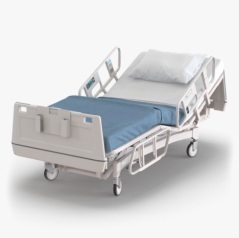 It may be vanity or my own pride but I grew up in a hospital and have no desire to turn my apartment into a hospital unit.  The optics of independence and self-determination are important so I stubbornly hang onto them.  Having something like what is pictured is just the beginning of turning one’s home into a medical unit.  I went to Sleep Country.

I hadn’t been in a Sleep Country in years and had forgotten how they configure their showroom.  When all of your floor stock is arranged with about a foot between each mattress or frame there is no room to pull a wheelchair up so you can lie on it to see how it feels.  Kind of like buying a new car, they don’t have hand controls so you buy with no test drive.  The same with beds.  You can’t get beside it so you can’t lie on it until it is in my home.  For that reason I get pretty concise on measurements, etc.

I had a 16″ pillow top queen size mattress on a 7″ box spring lying on the floor of my bedroom.  That gave me a total height of 23″ which worked well.  I can’t get undressed or dressed in my wheelchair so I park by the foot of my bed, get out of my chair, undress and then knee it over to the bed and jump in.  I did a few calculations and measurements to realize I could go as high as 30″ without too much difficulty.  Going over 30″ makes that jump from my knees up onto the bed much more difficult with a higher risk factor.  I’m planning for the future so I don’t want things to be more difficult, say, three years from now.

As I said I did all of the measurements and by the time you eliminate the boxspring I would need an electric bed frame that was no more 15″ off the ground.  I even went back to the store with tape measure in hand and all the measurements from home.  The bed I was looking at would need 7″ cut off the legs (which would still leave room under the frame for the tilt function to work).  What was delivered was way beyond that and after a week of back and forth I finally have what I paid for.  That was after taking in a video.

I can live with that.  The store worked with me to make things work.  What really twisted my underwear into a knot was an Island Health workers refusal to hold my camera phone while I made this little video.  I wanted to get a video of me getting out of my chair and moving around the bed.  Not a difficult thing to do except the home care worker didn’t want to get “caught up in controversy” and refused to hold my camera-phone.  It’s pretty straight forward and I assured her no one would know who was holding the camera plus she didn’t have to say a word so no way to identify her.

I’m a pretty easy guy to service.  There is really nothing for community health workers to do at my place since I’m quite good at doing it all.  But to get on the waitlist for an assisted living facility Island Health’s policy states I need to be in receipt of 30 hours per month of home care.  With that said, during the assessment process it was made pretty clear that I didn’t really meet the criteria for any of these homecare services but we did agree on an hour a day “just to go through the motions” in order to attain the hoped for outcome.  So now I leave a few dishes in the sink so they at least feel like they have done something.

I could deal with the bed, I was an anomaly to Sleep Country (but there are lots of us on the way).  What I couldn’t deal with was the arrogance and ignorance of a homecare worker who refused to do a simple thing (hold a camera phone) for god knows what reason.  I basically gave her the next 45 minutes off and suggested she go get a coffee somewhere.  I was in no mood to deal with willful ignorance…

Now I am getting much better sleeps but still working out the kinks when it comes to recliner/tilt angles…still playing with the remote in the middle of the night to realign the tilt but getting better.