“We become what we behold.  We shape our tools and then our tools shape us” – Marshall McLuhan

Change of pace for today, I need a break from the world of news, disability and access.  As a political news junkie, tuning out is difficult but metaphorically it is my fentanyl crisis.  Due to the toxic nature of the news these days I need to tune out and just chill.  So today a change but related to my passion in it’s own way.  Let’s see what 60 years of finding distractions has taught me as a person, not an activist.

Baby-boomers were the first generation to grow up in a world of television.  However many of us went the first 4 to 10 years of our life without the distraction of television.  It is important to note here that those are the same years you are in the “imprint phase” of developing the core of your belief system.  The experiences and behaviours you are exposed to will set the stage for your beliefs but how they are applied starts during the “modelling period”.  It was during that modelling period when TV first made its presence known in my life.

This year marks the 60th anniversary of my parents first TV in 1957.  Television was a growing industry and to own one meant you had moved into the growing “middle-class”, historically a new norm in Canada.  It sprouted from the “working class” of the 19th century and the purchase of a television was one measurement that marked middle-class status.  There was a reason for the “keeping up with the Jone’s” saying.  But again I digress and my point was to demonstrate how a quickly a new technology can impact us.

We didn’t have televisions in the hospital.  When time wasn’t scheduled with activities we depended on ourselves and our imagination for distraction.  As a kid in a hospital bed your imagination during this personal time was a very valuable quality.  It was a tool to adjust perception by making what could be seen as a traumatic experience into something more acceptable.  That tool was the difference between accepting the fact that another young friend was being taken down the hallway, covered by a sheet on a gurney when it could be more pleasant pretending it was Icarus in a chariot thumbing his nose on the way to the sun.  That type of perceptual flexibility eased the trauma of losing another friend while creating some maneuverability with a burgeoning belief system. 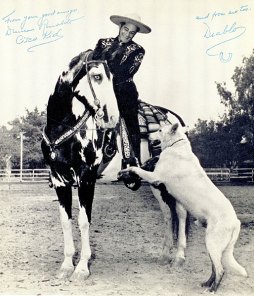 A baby-boomers childhood television show, visited the Children’s Hospital during the 1958 Calgary Stampeded

The melding of entertainment and marketing marked a paradigm shift for the advertising industry while the impact of an evolving social media atmosphere began shifting the goal posts of groupthink.  Market segmentation could now produce markets never before thought of.  All of those year of preparation and today nothing gets a baby-boomer’s attention to a television ad faster than a Monkey’s song playing in the background.

If you take television advertising and throw social media into the mix the marketing industry has never been more powerful.  Now companies can spin perception and focus on market segments never before realized.  What twenty-five years ago had been the digital divide is also a “generational divide“.  Our kids know the technology but lack the history of how we got here.

That said lines get blurred, what might have been an episode of Happy Days may seem like that evening at the local A&W.  This confusion between reality and a episode from a popular television show impacts our beliefs.  Recognizing this creates a deeper understanding of our core belief system and the effect those beliefs have on our other skills like pattern recognition.  And when you study marketing you are always looking for patterns, that is how you segment a persona.

Baby-boomers are the bridge generation from the Sears catalogue demography to the world of Google.  When you look at it from a systems point of view, the baby-boomer prodigy, the Generation X‘er are really the “router” between the baby-boomer’s and the Millenials.  As we moved from that Sears groupthink to todays world of social media I see things through different lens.

Case in point.  I just watched an ad that started off with that “Wonder Years” look, a show buried deep in the psyche of just about every Millennial, most of them had a crush on Winnie.  A young kid, we’ll call him Tommy maybe 14, is making that first clumsy phone call to what is probably his first crush (we’ll call her Bobby Sue out of respect for “Petticoat Junction“). The current technology of the Wonder Years generation was mainly rotary phone and the phone is the centrepiece of the start of the ad.

Today we are so over stimulated with technology that our attention span is very brief so you have a small window to hook the viewer quickly.  That is best achieved on the subconscious level with something your target group relates to hence the Wonder Years reference, it’s buried in a market segments psyche. This advertising approach (market segmentation) was spurred on by the development of “industrial psychology” as a profession in the late 70’s, early 80’s but that is a whole different discussion.

In keeping with the social structure of that time when the father answers, Tommy politely asks for permission to speak to the daughter, not quite “Little House on the Prairies” but continuing with that Wonder Years politeness. The two kids chat for a minute and, after getting her dads permission, she invites him over for a BBQ.

Flash forward thirty years and there’s little Tommy texting Bobby Sue on her smart phone while she sits at her kitchen table doing what I can only assume is homework on her tablet. “Wanna come over for supper (emoticon, emoticon)” she types and Tommy sends the big thumb emoticon back.

Flash forward a couple of hours. There’s (gotta be cautious here because use the wrong descriptor you’ll piss someone off) this African-American family and little Caucasian Tommy in the backyard at a picnic table laughing, joking with each other eating hotdogs, potato salad and all the family friendly things we take as average today.

The ad ends with a package of “Hebrew National All Beef Franks” with a voice over stating “regardless of how times change something’s will always be Kosher, go out and pick up some Hebrew Nationals today”.  When it came to market segments there wasn’t a base left that wasn’t covered and this is how our tools shape us.  A 60 second ad for a 10 second product announcement but it hit the audience they wanted.

The analysis of an ad…I’ll leave you with mine, don’t worry about Waldo find the friggin donate button…