Having spent all of my life with a disability I have learnt never to take anything for granted.  If I accepted every “assumption” that had been thrown in my direction I probably wouldn’t be where I am today.  With that said I often find myself making assumptions regarding aging or more accurately I take certain things for granted. 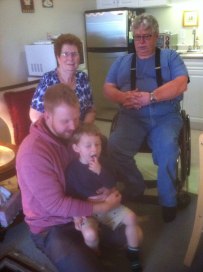 The four generations of one limb on the Wiens family tree, Mom, me, my son Sean and my grandson Taylor in mom’s apartment

Baby-boomers have entered retirement while redefining aging.  Demographically we have more four generation picture than anyone before us.  We now live in a time where there are two generations of seniors making it easier for boomers to deny aging.  This whole “60 is the new 40” attitude is changing the whole concept of retirement.

Most of the boomers I know still have at least one, in many cases both, parent alive and well.  We grew up believing grandparents were “old” people which creates some cognitive dissonance when we are also grandparents.  We have different expectations of retirement than our parents do.  We still help our parents, support our kids (who are really adults) and wrestle with the reality of being a grandparents ourselves.  After all being a grandparent is an admission of age.  We are also confronted with a system of retirement support that hasn’t caught up to the needs of boomers.

My grandmother’s generation spend their last days either at home or in a nursing home.  That more institutional approach was common to the societal norms of that time and would have been considered “collective care”.  Their children, our parents, idea of retirement was focused on a safe and secure environment while still providing a level of independence, “communal care”.  Physical needs met but autonomy promoted.

This required a shift in societal thinking from the nursing home approach (care as service) to assisted living facilities (care as business).  That is a concept that slowly started to evolve in the 80’s.  It was a by-product of the approach to deal with injured Vietnam veterans.  The societal norm had shifted to a more independent aspect of life than previous veterans.  This was a major shift in the belief systems of an entire generation, the baby-boomers. 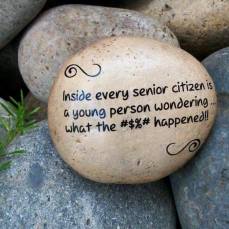 The rock garden of age

Any major shift in belief systems can be very challenging.  Today technology and social media is pushing belief systems at a very accelerated pace.  Recently I have come to the conclusion that the biggest challenge facing baby-boomers and retirement is not the aging process but the threat to their belief system.  We all have tools that help us adjust ourselves to the “age related” issues.

I have friends that use a cart more than they use to to continue their golfing hobby or have added “grab bars” in the shower to help with balance.  These are natural transitions aimed at maintaining physical safety but do nothing to alleviate a belief imbalance.  How flexible are your beliefs?

The advances in technology are allowing us to live longer and with improved quality however the acceptance of that same technology can be challenging.  We need to adjust our beliefs accordingly or you risk being left in the past.  I know too many boomers stuck bitterly in the past due to their resistance to accepting technological change.

To put this in perspective, how many baby-boomers remember the outrage many of our parents or grandparents had over that “devil music” rock and roll?  How many remember being told “it’s just a fad and we will get past it”?  I know many baby-boomers who see technology through that same type of lens.

It is not aging that is creating the bitterness, it is their inability to adjust to change.  Aging and retirement isn’t meant to be a punishment, it should be seen as a celebration and an honour for a life well lived.  Be your own agent of change and start by getting to understand the technology that surrounds you.  You don’t have to be an expert but at least get a learners permit.  The world is a much better place when you can put the technology into perspective.  Unless you plan on dying before you retire technology is going to play a big part in your life, it already is.

I remember watching a training film in the mid 70’s called “Pack Your Own Chute” by a management guru of the time Eden Ryl.  It was all about taking responsibility for your own actions.  There is a certain irony here watching a 35mm film on YouTube.  The message may be on a dated platform but the message remains the same.  Enjoy…